This is an excerpt from The Art of Agile Development, Second Edition. Visit the Second Edition home page for additional excerpts and more!

This excerpt is copyright 2007, 2021 by James Shore and Shane Warden. Although you are welcome to share this link, do not distribute or republish the content without James Shore’s express written permission.

I’m not aware of any good studies on this,1 but I think it’s something every programmer has experienced. When starting a new codebase, we’re incredibly productive, but as time goes on, changes become more and more difficult.

1The most commonly quoted source is Barry Boehm, who has a chart showing exponential cost increases, but that chart is about the cost of fixing defects by phase, not the costs of change over time. And, as it turns out, that chart doesn’t accurately reflect the underlying data. Laurent Bossavit does an excellent job of chasing down the data in [Bossavit2013] (ch. 10 and appendix B).

That’s a problem for Agile. If change becomes significantly more expensive over time, the Agile model doesn’t make sense. Instead, the smart thing to do would be to make as many decisions as possible up front, when they’re the least expensive. In fact, that’s exactly what pre-Agile methods tried to do.

For Agile to work, the cost of change must be relatively flat, or even decreasing over time. Kent Beck discussed this in the first XP book:

[A flat cost of change curve] is one of the premises of XP. It is the technical premise of XP...If a flattened change cost curve makes XP possible, a steep change cost curve makes XP impossible. If change is ruinously expensive, you would be crazy to charge ahead without careful forethought. But if change stays cheap, the additional value and reduced risk of early concrete feedback outweighs the cost of early change. [Beck2000a] (ch. 5)

But—as we’ve all experienced—the cost of change isn’t flat. It does increase over time. Does that mean that Agile teams are doomed to collapse under the weight of unmaintainable code?

Without evolutionary design, Agile teams collapse under the weight of unmaintainable code.

The brilliance of XP was that it included practices to proactively reduce the cost of change. Collectively, these practices were called “evolutionary design.” XP remains the only mainstream Agile method to include them. That’s a shame, because without evolutionary design, Agile teams do collapse under the weight of unmaintainable code.

I first heard about evolutionary design in 2000. It sounded ridiculous, but I respected the people recommending it, so I tried an experiment. My team was just about to start a new project. We started with a traditional up-front design, then applied evolutionary design from that point forward.

It worked. It worked incredibly well. Evolutionary design resulted in steady improvement, giving us a design that was cleaner, clearer, and easier to change than the up-front design we started with. I’ve been pushing the boundaries of evolutionary design ever since.

My experience is that evolutionary design does decrease the cost of change over time. I’ve seen it over and over again. As with traditional design, I’m not aware of any good studies on this, but I do have some empirical data to share.

2The screencast is available at https://www.letscodejavascript.com. The networking example can be found in episodes 370-498 of the Live channel.

One example occurs in the screencast’s implementation of live networking, shown in the “Real-World Evolutionary Design” figure. I broke the networking feature up into five stories: first, I networked the user’s mouse pointer, which took 12 hours; then line-drawing, 6½ hours; clearing the screen, 2¾ hours; and two tricky polish stories, ¾ hour and ½ hour. Although the final two polish stories were much more complicated than the initial networking stories, they were also much faster, because they could rely on a clean underlying design. 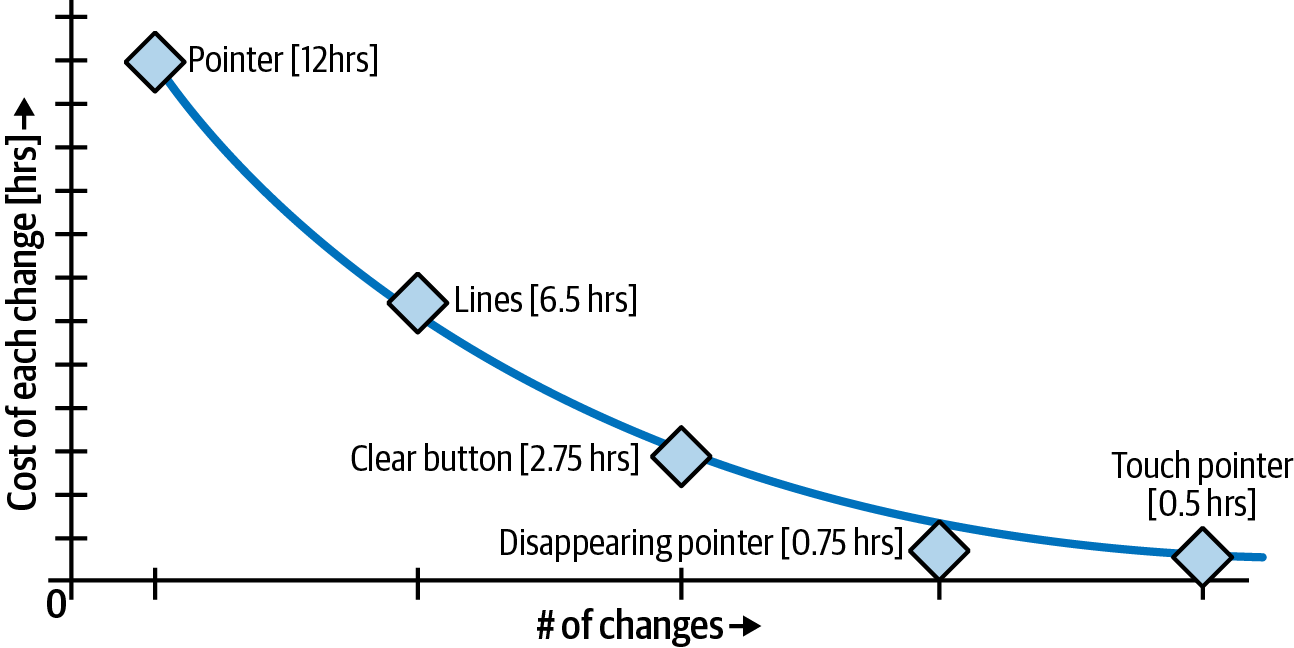 This matches my real-world experience. In the real world, each new design challenge goes through the curve shown in the figure, leading to a kind of “saw-tooth” appearance to the cost of change. The overall trend, though, is downhill. With evolutionary design, your design gets steadily better over time, making your software easier and easier to change. The improvements mesh together, too: for example, the final networking changes also benefited from previous design improvements I had made to frontend event-handling code.

Evolutionary design is essential to long-term success with Agile.

Evolutionary design is essential to long-term success with Agile. It’s revolutionary. And barely anyone knows about it.

This chapter has three practices for evolutionary design:

The practices in this chapter are based on Extreme Programming’s approach to design. In the conversation surrounding XP, it was called “evolutionary design,” which is the umbrella term I’m using here. Kent Beck called it Simple Design in the first edition of XP [Beck2000a] and Incremental Design in the second [Beck2004].

I’ve used both of Beck’s terms for the practices in this chapter, each focusing on a different aspect of evolutionary design, and added Reflective Design, which was called “merciless refactoring” in the early days of XP.

The details I discuss in each practice come from a variety of sources, as well as my own experiences with evolutionary design. Martin Fowler and XP’s “Three Amigos”—Kent Beck, Ron Jeffries, and Ward Cunningham—were all major influences.

Share your thoughts about this excerpt on the AoAD2 mailing list or Discord server. For videos and interviews regarding the book, see the book club archive.

For more excerpts from the book, see the Second Edition home page.